The suggested contribution at the door is $25 for adults, $5 for juniors, and $50 for families. Click here for more information about tickets.

Throughout a career that now spans almost four decades, Juno and Canadian Folk Music Award winner James Keelaghan has created a repertoire of incalculable importance — a unique body of work, either inspired by or drawn from the folk tradition. Ten solo albums flush with enduring lyrical relevance. Take the beautiful but heartbreaking ballad, Jenny Bryce, for example. From any point of view, it’s indistinguishable from the numerous traditional tracks covered on his disc A Few Simple Verses. What’s more, various other originals from the Keelaghan cannon must surely enter the domain of traditional folklore, most notably Small Rebellions (highlighting the 1931 slaughter of peaceful striking miners in Bienfait, Saskatchewan); Hillcrest Mine (a prelude to the worst coal mining disaster in Canadian history); Kiri’s Piano (a triumph over adversity amidst the shameful, racist treatment of Japanese-Canadians during WW II); and Cold Missouri Waters (a harrowing portrait of the 1949 Mann Gulch Fire in the mountains of Montana). Eminent Rolling Stone critic Dave Marsh described Keelaghan as “Canada’s finest songwriter.”

Here is a video of James Keelaghan performing his song Cold Missouri Waters: 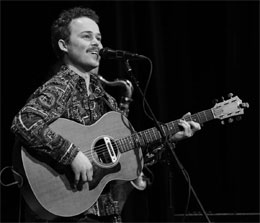 If you ask Reese Fulmer about himself, he’ll tell you he’s a brand new soul. But his songs tell a different story, with a clear eye, poetic touch, and unique imagination, of a conduit to something much older and deeper. Reese has quickly made a name for himself in the Capital Region, NY, as a precocious songwriter and engaging performer, with a sound reminiscent of Josh Ritter, Justin Townes Earle, John Prine, and Iron & Wine.

Here is a video of Reese Fulmer performing his song Leaving a Dream with The Carriage House Band.