The suggested contribution at the door is $20 for adults, $5 for juniors, and $40 for families. Click here for more information about tickets.

Joe Jencks is an international touring musician, award-winning songwriter, and celebrated vocalist known for his performances of musical beauty, social consciousness and spiritual exploration. A 25-year veteran of the international Folk circuit, Jencks has released 15 CDs in that time. Merging conservatory training with his Irish roots and working-class upbringing, Joe delivers engaged musical narratives filled with heart, soul, groove and grit. Blending well-crafted instrumentals and vivid songwriting, Jencks serves it all up with a lyric baritone voice that has the edgy richness of a good sea-salt caramel.

Joe’s most recent solo CD – The Coming of the Years – released August 1 2022 – is an album centered around songs Joe wrote while on tour in Ireland over a 12-year period.  This album emerges as a synergistic blend of Jencks’ Irish and Celtic heritage with themes of immigration  spanning multiple generations.  As a dual U.S./Irish citizen, Jencks has been swimming in these waters musically and personally for decades.  The Coming of the Years is a deep musical exploration of identity and place, carried forward by beautiful melodies, expressive vocals and rich lyric narrative. 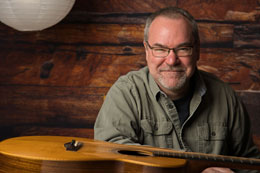 New England area Singer-songwriter Chris LaVancher released his third full-length album in November 2021 –  “After The Flood” a collection of songs full of heart from a seasoned and skilled craftsman mining life’s subject matter  – family challenges, work, love and love lost, childhood memories, and finding one’s place in the universe.  Chris’s performance evokes a mini-movie festival in your head, complete with a full soundtrack. He writes cinematic, character-driven songs.  His song Nostalgia from his second album, Big Fat Love, received an honorable mention in the 2018 Woody Guthrie Folk Festival Songwriting Contest.  In 2022 and 2014 Chris was selected as a Falcon Ridge Folk Festival Emerging Artist and performed on the main stage.  Chris grew up in the hills of North Central Pennsylvania where he learned to observe the many wonderful characters that inhabited that little town.