The suggested contribution at the door is $25 for adults, $5 for juniors, and $50 for families. Click here for more information about tickets.

Kemp Harris defies categorization. He is a singer and songwriter, a master weaver of American musical styles. He’s an actor, activist, author, and storyteller, and an award-winning educator who has taught young public school students for more than 40 years.
“It’s all about communication,” Kemp says. “Everything I do.”

Born in segregated Edenton, North Carolina, and transplanted to Massachusetts, where he bounced between relatives’ homes, Kemp learned to adapt to whatever world he found himself in – a talent that has come to define him as a person and an artist. He began writing songs at 14 and recording them in college, using a pair of old cassette players to track parts, and has been delighting music lovers ever since with his earthy, soulful creations.

Kemp honed his powerful, intimate performance style in Cambridge’s coffeehouses, developing into a magnetic frontman who has shared stages with artists such as Koko Taylor, Gil Scott-Heron, and Taj Mahal. He has composed original music for the Alvin Ailey American Dance Theater and Complexions Contemporary Ballet, established a songwriting residency at Boston’s Wang Theater, and recently delivered a series of master classes at Berklee College of Music on the subject of Artists as Activists, alongside Chad Stokes of the band Dispatch and members of the dance troupe Urban Bush Women.

Here is a video of Kemp and his band performing Kemp’s song Sweet Weepin’ Jesus. 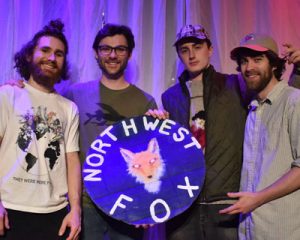 The visionary Gloucester-Amherst based alternative rock group immerses listeners into colorful melodies and the whole live-music experience. Basements, lawns and bars, out on the water or in the deep woods, Northwest Fox explores the boundaries between multi-instrumental and acoustic artistry, alongside local singer-songwriters.