The suggested contribution at the door is $20 for adults, $5 for juniors, and $40 for families. Click here for more information about tickets.

Marina Evans and Bernardo Baglioni are an international folk/americana duo who divide their time between Marina’s native New England and Bernardo’s native Italy. Combining Marina’s sultry vocals & unusual melodies with the raw, gritty edge of Bernardo’s slide guitar, soulful voice, and the sweet interjections of his mandolin, the duo’s sound has been refined over years together on the road, the stage, and in the studio. Together the pair has captivated audiences across the United States and in Europe, and is now at work on their fourth original record. Marina’s passionate live performance has earned her solo opening sets for such legends as LeAnn Rimes, Judy Collins, Maria Muldaur, Jonathan Edwards, and Loudon Wainwright III, as well as two nominations for Female Performer of the Year at the New England Music Awards.

Here is a video of Marina and Berna performing Marina’s song Sunday Morning: 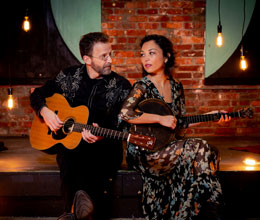 Monique Byrne and Andy Rogovin of Crowes Pasture perform moving and inspirational songs that are sometimes joyful, sometimes wistful, and oftentimes, poignant, and that reflect a mutual passion for life, family and humanity. Their intimately blended vocal harmonies are mixed with an expressive and unique instrumental style that is best described as “a banjo-guitar romance.” Crowes Pasture’s style of intimate and soulful folk transports and connects listeners through universal experiences in their “skillfully crafted, emotional songwriting” (Chris Eastburn, award-winning composer).